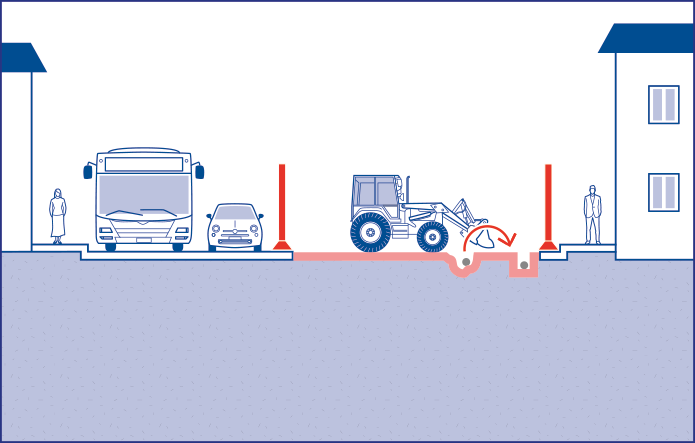 In order to proceed with the excavation and construction of the underground structures, it is necessary to move all the utilities grids (water, electricity, gas, telephone) installed beneath the roadway. 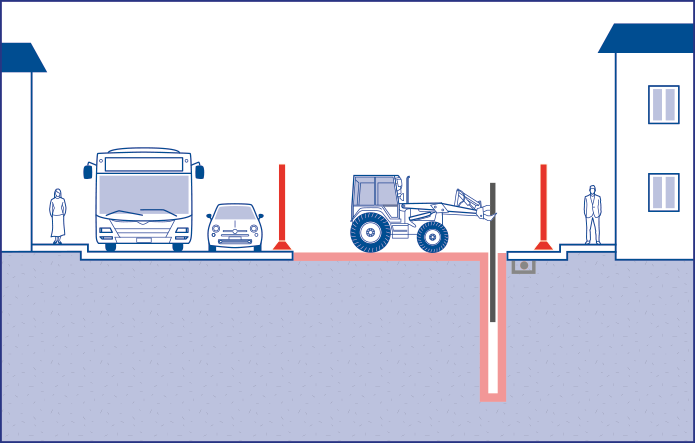 Once the underground services have been moved, construction begins with the insertion of interconnected micropiles to form the side walls of the tunnels and sustain the ground surrounding the excavation. The works are carried out in parallel with the moving of the underground utilities, in the same area and within the same time frame. 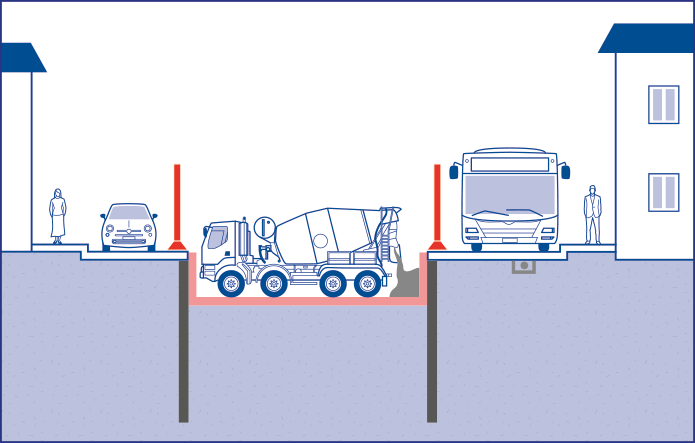 The covering is constructed standing on the walls constructed with the micropiles. This roof slab facilitates the restoration of the road surface and it better protects buildings from dust and noise. This phase will last about 6 months. 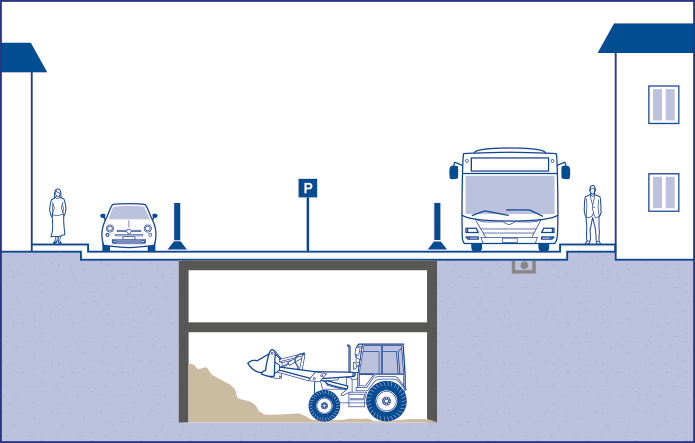 While the area on the surface, freed from the construction site, can be used for parking, excavators dropped through an opening in the covering can proceed with the excavation of the underground tunnel. The construction site occupies the central lane of the roadway in this phase.

In order to guarantee the strength and stability of the walls, yet another concrete covering is constructed about 6 m underground for the tunnel and about 20 m for the stations. This phase will last about 15 months. 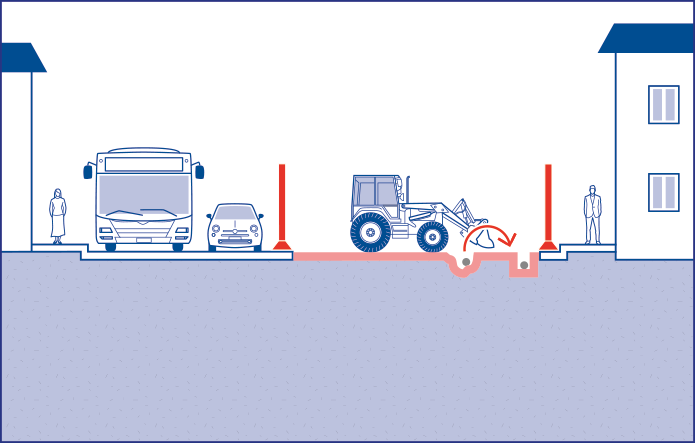 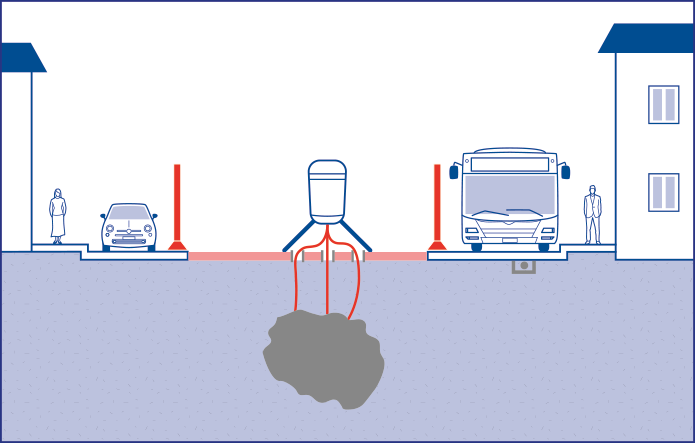 In order to guarantee complete safety, the ground involved in the excavation is artificially consolidated from the surface by injecting concrete that then forms a protective covering directly at the depth of the future tunnel. 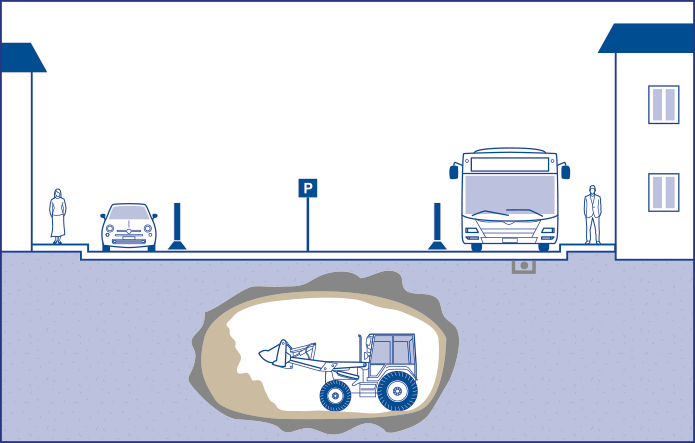 While the area on the surface, freed from the construction site, can be used for parking, excavators dropped through two shafts connecting the surface to the underground can continue with the excavation; the shafts also allow the excavated materials to be removed, and the construction material to be lowered into the tunnel. 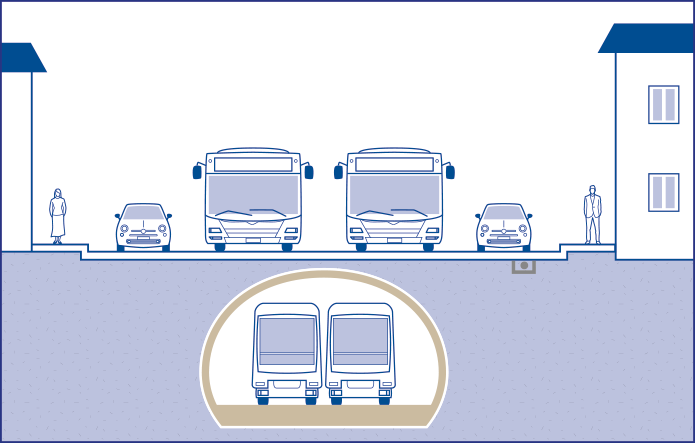 Once the excavation is terminated and the basement of the station is constructed, the tunnel is ready for the installation of tracks, technological systems, safety equipment, and the connections with the Control and Command Station required for the train to operate. In this stretch of the tunnel, the trains are supposed to travel on two tracks.

The excavation of the tunnel for the Torino Automatic Subway was mainly carried out with a TBM (Tunnel Boring Machine), so-called “mole”. The TBM enables the excavation of long stretches while dust and noise remain underground, thereby minimizing the inconveniences and disturbance associated with the construction site on the surface.

The TBM is indeed a mobile construction site that advances at a speed of 12-15 m a day, with peaks of 24 m. The machine is fully self-equipped for the excavation, the disposal of debris, and the covering of the tunnel.

It is about 100 m long, and in order to be transported it must be disassembled into individual elements, and then reassembled underground before the excavation takes place.

Its essential components are the shield, a 10 m long metallic cylinder enclosing the machine; the head cutter performing the excavation, about 8 m diameter wide; a back-up constituted by support wagons for the shield, about 80-90 m long.

The Moles of the Turin Underground

During the construction of the Underground, 5 TBM were used in total, and as usual they were named after women.

From 2002 to 2005 “Valentina” dug the stretch between the stations of Fermi and Pozzo Strada, “Madama Cristina” between Principi d’Acaja and Pozzo Strada, “Valeria” between Porta Susa and Principi d’Acaja and them from Porta Susa to Porta Nuova; between 2008 and 2009, “Caterina” realized the stretch going from Marconi to Lingotto under Via Nizza, while “Masha” recently completed the excavation for the new stretch Lingotto-Bengasi, which started in 2016 and finished in 2018.

The mole can work 24 hours a day, 7 days a week. Each shift requires a highly specialized working team.

The works are organized in two distinct stages. The first one is dedicated to the excavation, which takes place about 20 m underground without interfering with the utilities grid (installed at a higher level). The cutter, which rotates once every minute, crumbles up the ground; the excavated material enters a “chamber” behind the shield, and through a screw called cochlea it is channeled on back-up wagons through a conveyor belt. Subsequently, a work train transports the debris in the station supporting the TBM where they are raised on the surface through a crane bridge.

The second stage is dedicated to covering the tunnel with concrete precast elements, called segments. These are brought to the head of the TBM, raised by a mechanical arm, called “segment erector”, and they are positioned in the shape of a ring. In about one hour of work, the TBM can dig and cover 1,5 m of tunnel, corresponding to the length of a segment.

After the passage of the machine, the tunnel is essentially ready for positioning of the rails, the technological plants and the safety systems.

The Protection of Green Areas

The construction works for the Turin Underground envisaged and required a series of interventions on the tree-lined streets Corso Francia, Corso Vittorio Emanuele II and Via Nizza, which interfered with the excavation of the stations and the ventilation shafts.

Therefore, in order to protect green areas, the trees were transplanted elsewhere; after the works were concluded, where it was possible, some trees were substituted with new specimens.

The trees can be transplanted with two different techniques: the GTM transplantation foresees the use of a special machine capable of raising the plant with the plot of ground containing its root; the traditional transplantation is used for more compact and difficult types of soil, and it uses a digger that frees the roots from the ground and a truck crane which moves the plants for the following transplantation.

During the digging phase, InfraTo planned the realization of a particular computer system monitoring and supporting the management activities related to the excavation and the construction of the tunnel. This system allows technicians to receive real time information and visibility on the entire realization plan of the tunnel.

The system, called Order Portal, processes data coming from the TBM and returns it into engineering and geo-referenced terms; data regarding the structural monitoring of land, streets and buildings located near the tunnel, which signals every little movement (fractions of millimeters); and data concerning environmental monitoring.

Monitoring locations are defined and updated during the development of the works operated by the project designer.