Line 2 is intended to serve the northeast-southwest metropolitan axis of Turin. The vehicles will be conducted automatically in order to reduce waiting times and increase the service offer in all time slots. 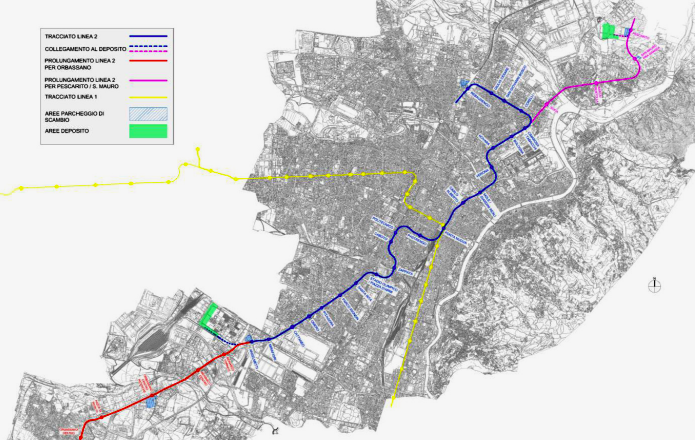 “Y” shaped Line 2 will connect 32 stations through a track that is 27 km long in total, divided in three main stretches: a central one, 16 km, connecting 23 stations from Rebaudengo to Anselmetti; a soutward extension, which leads from the former station until Orbassano, connecting 5 stations along a 6 km long track; and a northward extension of the same length which has 4 stations and brings to Pescarito/S.Mauro.

The facility will contribute to reinforce the links between the main city hubs, among which the establishment of FCA in Mirafiori, University hubs such as Campus Einaudi and the Politecnico of Turin, the city center, and Giovanni Bosco Hospital. Line 2 with integrate into the existing public transportation network thanks to three interexchange points: in Zappata and in Rebaudengo station it will connect to the Metro Rail Transit System, while in Porta Nuova Station, which is an intermodal hub of excellence, it will intercept Line 1 of the Underground. Moreover, four interchange parking with public and private vehicles will contribute to improve the intermodal transportation system in Orbassano, Anselmetti, San Mauro and Rebaudengo stations. For what concerns interchange between bicycles and the underground, bike parking and bike-sharing stations will be located near the stops, and covered and safe areas for long stopovers will be included in the main stops of the line, in order to facilitate the use of the bike by commuters or the residents who live far from the underground track.

In December 2017, the City Council of Turin assigned through public bidding the task of drawing up the preliminary draft of Line 2 central stretch and the Feasibility Study for the northward and southward extensions.

The technical and economic feasibility project of the central stretch was delivered in May 2019 and that of the extensions towards Orbassano in the south and San Mauro in the north followed in June of the same year.

By the end of the year, the project will be presented to the Ministry of Infrastructure and Transportation to request funding.